Aaron Clarke knows a thing or two about saying the words, “debt,” “bankruptcy,” and “repossession.” He built a million-dollar credit repair business on it.

The old adage “money talks” seems ironic if you consider how many of us feel uncomfortable talking about money. Media and literature often chatter about gaining wealth and acquiring assets, yet fail to discuss the reality that most Americans face today: we are drowning in debt.

Statistics like these sound depressing because they present debt as an insurmountable problem: if everyone else is in debt too, what chance do I have?

Consider an engineer searching for viable green energy sources. To get started, the engineer wouldn’t pretend that our current energy problems didn’t exist. Rather, he or she would hold discussions about our energy landscape, compile ideas, then take steps towards a new and improved solution.

Credit repair agents know that avoiding debt talk is exactly what keeps us in debt. They’re striving to repair a broken credit system by shattering taboos about finances. Read on to find out how.

To understand why debt, bankruptcy and other “dirty” words are usually missing from the conversation at a dinner party, we have to dive into how the human psyche works.

Generally speaking, human nature is simple: we want to look good in front of other people and avoid looking bad.

Why do you think social media has caused such an uproar? We curate our lives online so we always show our best side.

This desire to look good, is exactly why we avoid openly discussing money woes. Our society has learned to equate wealth with looking good, and debt with looking bad. So when someone is on the verge of bankruptcy, they’re likely to believe that it’s a shameful personal failing and avoid the topic wherever possible.

Is it Time to Rethink How You Think About Money?

People who have recovered from their financial woes know that bankruptcy, debt, and insolvency don’t make them bad or inferior. Conversely, money woes are just short-term problems to be solved. People who have been wealthy before will foresee themselves becoming wealthy again. They have the core belief that they’re capable of reaching their dreams.

On the other hand, people who have always struggled with debt, or a lack of money, might find it impossible to imagine a prosperous future as they don’t think they have experienced one before. The likelihood is, they have the core belief that they’re incapable of reaching their dreams.

“Our life is shaped by our mind; we become what we think.” ― Gautama Buddha

To know whether or not you need to reframe how you think about money, take note of the immediate answer that comes to mind when you ask yourself these questions:

If you answered yes to any of the questions above, you might need some help changing your core beliefs around money. Here are some helpful resources to get you started:

A credit repair agent becomes a credit hero when he or she is able to help make someone’s perceived impossible (e.g. being accepted for their first mortgage) feel possible. Or even become a reality. Like the people who have lost and regained wealth, they know that bad credit is nothing to be ashamed of – it’s purely circumstantial.

“Dirty” Words Credit Repair Agents Use to Empower Others

Words have power over us because of the meaning that we attach to them. Once upon a time, “awful” meant being “worthy of awe”. And “nice” – derived from the Latin nescius which means ignorant – was a term for a stupid person. If you called someone “awful” 200 years ago, they would see it as a compliment!

Credit repair agents who are transforming the credit system know that today’s dirty words can be converted into tools for empowerment. Here are five words credit heroes should incorporate into their daily vocabulary:

How Credit Repair Agents Will Change the Debt Taboo

It was once taboo to have tattoos or raise a child out of marriage… how archaic do these taboos seem now? Taboos die all the time, but they can also take time to die. Credit repair agents who want to empower others through financial improvement can lead the way by continuing to talk about money and debt by doing by the following things.

By discussing their experiences

Our actions tend to mirror the actions of those around us. Most people don’t want to be the first guest on the dance floor at a wedding – it’s always easier when someone else makes the first move. Credit repair agents aren’t afraid to be vulnerable about their personal “dirty” money experiences. They show people that debt is nothing to be ashamed of, and others follow suit accordingly.

Plenty of famous people including Abraham Lincoln, Walt Disney, and Elton John have declared themselves bankrupt before. While these credit heroes built multi-million dollar credit repair businesses from scratch. Knowing that others have successfully argued disputes with creditors, or become debt-free for the first time in ten years, makes financial prosperity feel even more possible.

Credit repair business owners constantly seek to expand their financial knowledge and encourage others to do the same. Whether this is by hosting a credit card debt 101 class at a local community center or giving a talk to students on money habits.

Join our free online training to discover the secrets of starting a profitable credit repair business with no prior experience! 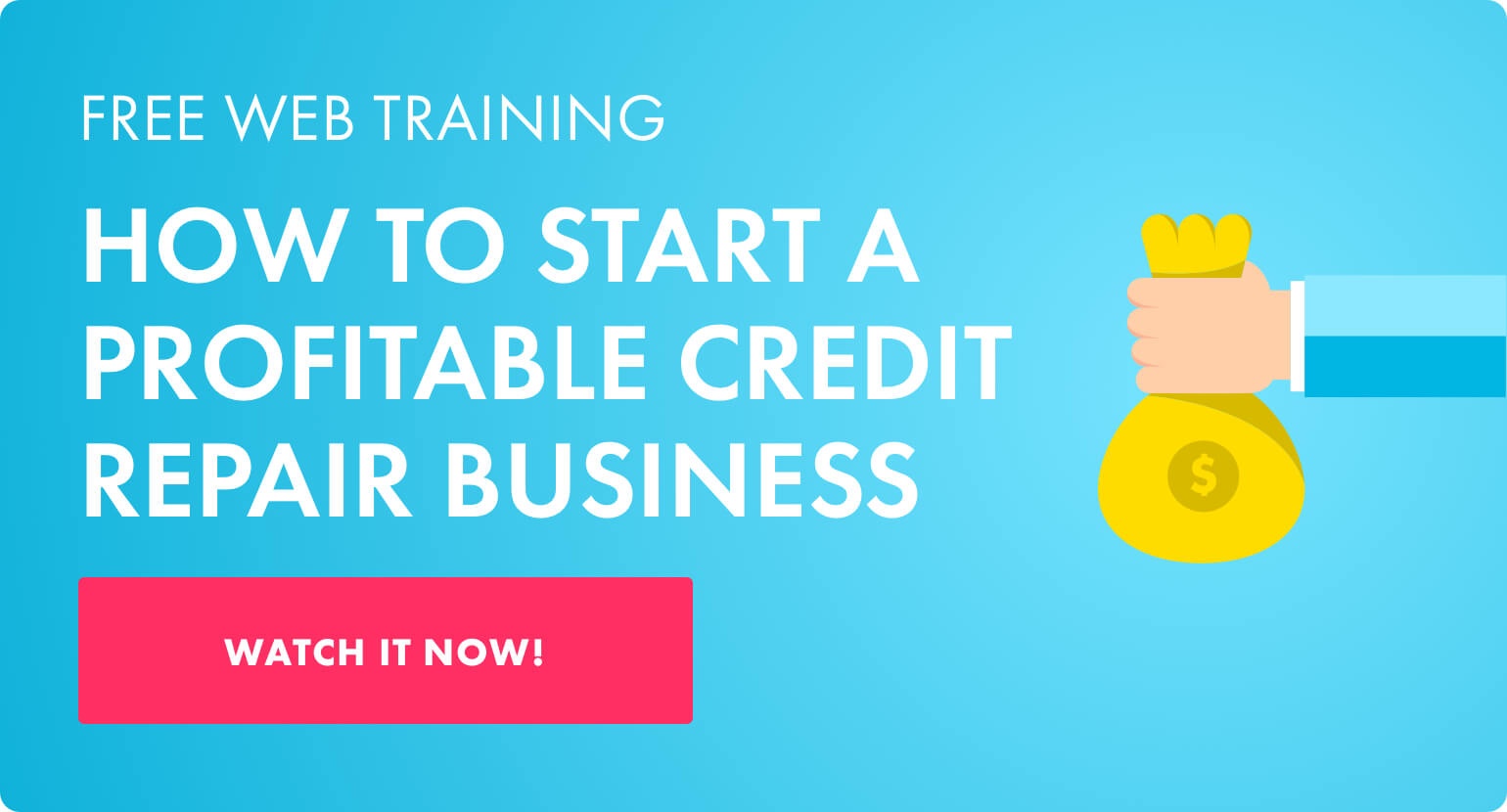